One type is fixed configuration switches, including most models below 3500. For example, 1924 is a 24-port 10M Ethernet switch with two 100M uplink ports. Except for limited software upgrades, these switches cannot be expanded;

The other type is modular switches, which mainly refer to models of 4000 and above. Network designers can choose different numbers and models of interface boards, power modules and corresponding software according to network requirements.

When choosing a device, many people have a headache with long product models. In fact, Cisco has certain rules for naming products. For Catalyst switches, the format for product naming is as follows:

Among them, NN is the serial number of the switch, XX is the number of ports for a fixedly configured switch, and the number of slots for a modular switch. A -C flag indicates a fiber optic interface, -M indicates modularity, -A and -EN means that the switch software is a standard board or an enterprise version.

At present, the common Cisco switches in network integration projects are the following series, 1900/2900 series, 3500 series, 6500 series. They are used at the low, mid and high end of the network. The following introduces these series of products:

Let's talk about low-end products first. 1900 and 2900 are typical of low-end products. In fact, in the low-end switch market, Cisco does not occupy a special advantage, because the products of 3Com, Dlink and other companies have better performance-price ratio.

The 1900 switch is suitable for desktop computer access at the end of the network and is a typical low-end product. It provides 12 or 24 10M ports and 2 100M ports, of which 100M ports support full-duplex communication and can provide up to 200Mbps port bandwidth. The backplane bandwidth of the machine is 320Mbps.

The 1900 with Enterprise Edition software also supports VLAN and ISL Trunking, up to 4 VLANs, but in general, low-end products do not require much of this feature.

If there are 100M desktop computers in your network, then the 2900 series may be more suitable. Compared with 1900, the biggest feature of the 2900 is the increased speed. Its backplane speed is up to 3.2G, and up to 24 10 / 100M adaptive ports. All ports support full duplex communication, which greatly improves the speed of desktop access. . In addition to the port speed, many other features of the 2900 have been significantly improved over the 1900 series. For example, the capacity of the 2900 MAC address table is 16K, which can be divided into 1024 VLANs, supports the ISL Trunking protocol, and so on. The 2900 series has a long product line. Among them, some are ordinary 10 / 100BaseTx switches, such as C2912, C2924, etc .; some are with fiber optic interfaces, such as C2924C with two 100BaseFx ports; some are modular, such as C2924M with two expansion slots. The expansion slot card can hold 100BaseTx modules, 100baseFx modules, and even ATM modules and Gigabit Ethernet interface cards (GBIC). The details are as follows:

In the 2900 series, there are two unique products, one is C2948G, and the other is C2948G-L3. The performance and price ratio of 2948G is good. It uses the same software as the Catalyst 5000/5500 and has 48 10 / 100Mbps adaptive Ethernets. Network port and 2 Gigabit Ethernet ports, 24G backplane bandwidth, hot-swappable redundant power supply, has a series of fault tolerance features and network management features. C2948G-L3 adds the ability of Layer 3 switching on the basis of C2948G. The maximum Layer 3 data packet throughput can reach 10Mpps. However, in general, 2900 series switches are generally used at the low end of the network. Gigabit and routing capabilities are not very important, so the two 2948 models are not used much in actual projects. 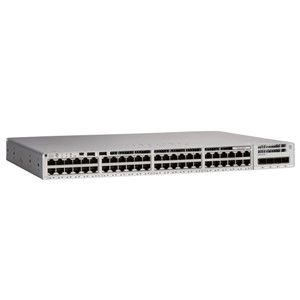